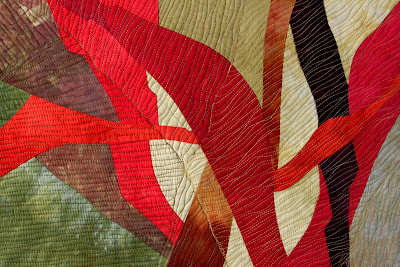 In mid-2008, Nancy Crow invited several artists to submit work for consideration for Color Improvisations, an exhibit she was developing with Genie Curtze.  The work was to be based on a 4-plex format, machine pieced, and large - 6 to 8 feet square (yes, square).  I had 8 months to submit three to five quilt tops.  I managed to get three pieces done, and all three made it through the first round of jurying.  Then we were given until July 2009 to quilt and finish the pieces and submit them for a second round of jurying.

I did finish those three quilts by the deadline - which I thought was quite an accomplishment since during that time I had emergency gallbladder surgery, two hospital stays, and a second procedure to remove leftover stones.  I was not at my best during those 8 months.  I am honored that all three pieces were accepted for the exhibit.

Color Improvisations will consist of 54 large machine pieced works by 26 artists from the United States, Switzerland, Germany, and Canada.  These artists are dedicated to expressing their individual visions.  The opening venue will be the Haus der Wirtschaft in Stuttgart, Germany.  The exhibit will run from July 11 to August 25, 2010, with the grand opening reception on Sunday, July 11, 2010 at 2 pm.

The exhibition will travel throughout 2010-2012. Additional venues in Europe, Japan, and the United States will be announced. A catalog of the exhibit will be available in July 2010.

Shown above is a detail from my work, Tangle, copyright 2010 Bonnie M. Bucknam (photo by Mark Frey).
Posted by Handwerk Textiles at 3:37 PM 5 comments: 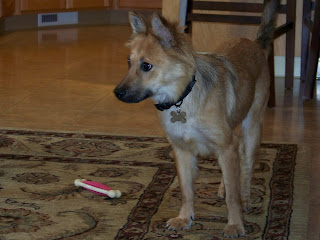 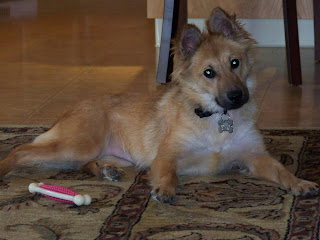 Here's Lily, the newest member of our family, adopted yesterday from the Oregon Humane Society in Portland.  We're having a great time getting acquainted!
Posted by Handwerk Textiles at 1:32 PM 3 comments: 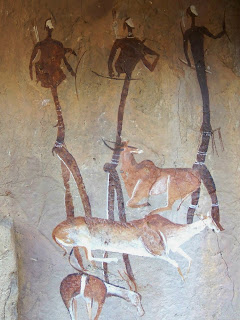 The March 2010 Handwerk Fabric Club selection is available to ship. The colors are based on the South African Bushmen rock paintings. Included are black with blue highlights, rock brown, iron oxide, yellow ochre, mica, and sandstone. Fat Quarter packages (1 1/2 yds. total) are $27 ($30 including shipping by first class post within the U.S.); 1/2 yard packages (3 yds total) are $54 plus actual postage to your location; 1 yard packages (6 yards total) are $108 plus actual postage. Email me at bonnie@handwerktextiles.com to order. Visa, Mastercard, and PayPal accepted.
Posted by Handwerk Textiles at 11:15 AM No comments:

Here are some photos from a drive to Oregon Gardens in Silverton this past January. 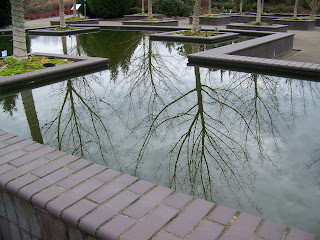 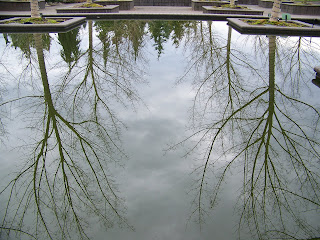 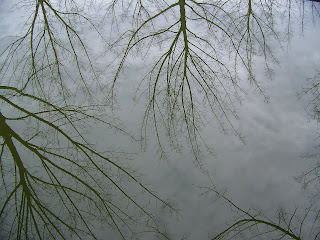 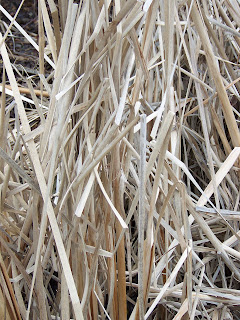 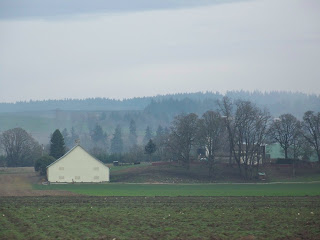 Posted by Handwerk Textiles at 5:46 PM No comments: 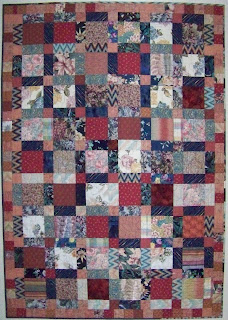 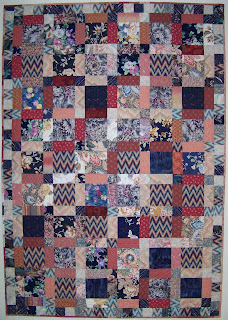 These two quilts are basically the same block as the slashed 9-patch, but use a different setting. However, I didn't construct these quilts using the 9-patch technique.  I wanted to use up scraps, so I actually cut all these blocks and lattice strips.  When I was calculating how many of what size squares and rectangles to cut, it was a bit confusing.  I decided to cut all the pieces out of blues, and all the pieces out of peaches, which resulted in cutting out two quilts at once - one with blue blocks and peach lattice and one with peach blocks and blue lattice. That was efficient.  Two down for Guatemala Bound!
Posted by Handwerk Textiles at 4:32 PM No comments:

Here are a couple of experiments with the slashed 9-Patch.  You've probably all done one of these.  They're very easy and efficient.  Just sew together a 9 patch.  I used 5" squares (any size square works, as long as you're consistent) and sewed them into 2 different sets: half with the purple fabric in the corners and center, and half with the green fabric in the corners and center.  Then cut the 9-patch in half in both directions.  Arrange 2 light blocks and 2 dark blocks and sew them together.  There are quite a few other layouts you can experiment with.

The first quilt I did came out mushy and dull because the purples and greens were basically the same medium value.  I tried to brighten it up a bit with the peach stipe in the border.  I don't know how successful that was. 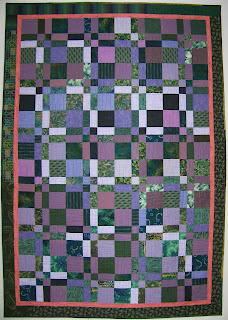 So, next I tried to pump up the value a bit.  I used darker purples and greens that were more to the lime/light side, I thought.  The quilts still has a mostly medium value look to it. 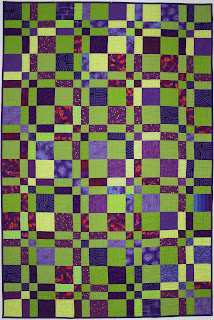 I made a crib quilt with a few blocks left over from the second quilt. 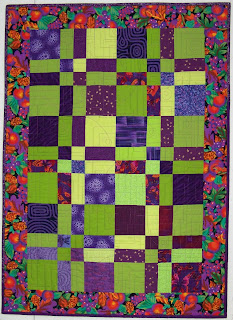 I have a few more quilts that are variations of the slashed 9-patch, but they're all in progress right now.  More on this technique later.

For those of you who are following the Guatemala Bound project, to date there are 48 quilts completed and about 25 more in the works.  We'll reach the goal of 80 quilts in no time.  Thanks all!
Posted by Handwerk Textiles at 3:15 PM 1 comment: