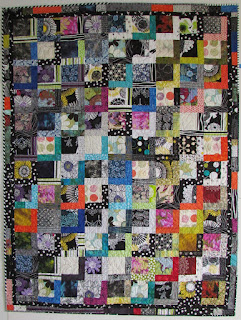 Here are the latest quilts being shipped to Mayan Families in Guatemala.  The shipment left yesterday and should be in Guatemala sometime in February or early March.  The bright quilt above is by Rosie from Seattle.  Below are two quilts from Pat B. in Idaho. 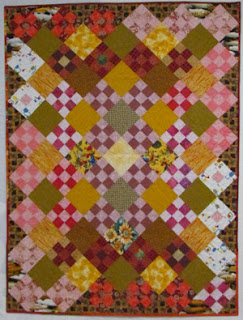 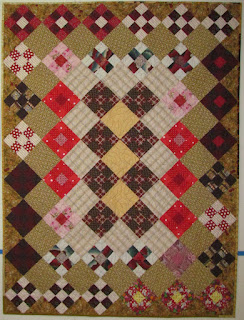 I made this quilt from some leftovers from 30(!) years ago. This cute crib quilt is by Patti W. from Anchorage. 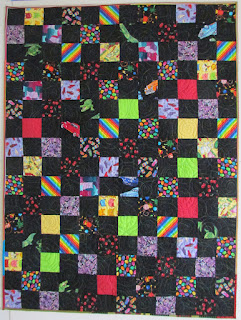 And the following 4 quilts are by the Lunch Bunch in Palm Desert, California. Thanks again to all who have contributed. 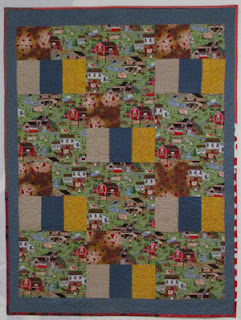 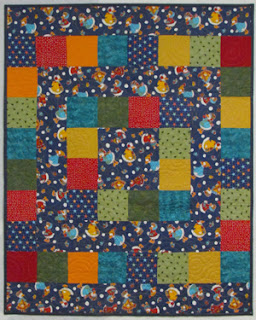 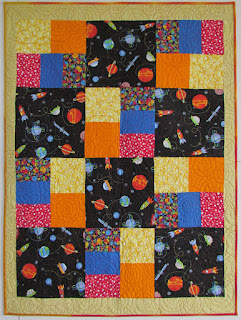 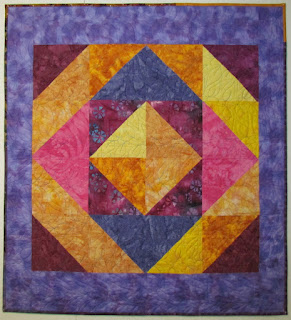 Posted by Handwerk Textiles at 7:39 PM No comments:

The new High Fiber Diet exhibit, Making Our Mark, will debut at Stitches In Bloom at the Oregon Gardens in Silverton next weekend.  It's always a great show.  Stop by! 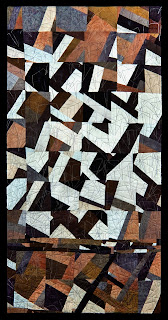 I like to take stock of accomplishments each year. 2015 was a year of exhibiting for me.  I was very productive in 2014, finishing 8 major works, so I had a lot to enter into the various exhibits that came along. I had four quilts in a solo show at the Portland Airport. The quilts hung there for the entire year. I also had a two-person show with Linda McLaughlin at the Arts Center in Corvallis, Oregon.  I had major pieces in group shows at: Quilt National 2015 at the Dairy Barn Arts Center in Athens, Ohio; Quilts = Art = Quilts at the Schweinfurth in Auburn, New York; Finding Our Place: The Geography of Art at the Annmarie Sculpture Garden and Art Center in Dowell, Maryland where I received a Juror's Choice award; Form, Not Function: Art Quilts at the Carnegie in New Albany, Indiana; and Patchwork Design in Rio de Janeiro and Sao Paulo, Brazil.  The Portland art quilt group, High Fiber Diet, had a group show entitled What's Blue to You?  I had a piece in that exhibit, which showed at the Portland Airport, The Gallery at Lower Columbia College in Longview WA, The Second Story Gallery in Camas WA, and the gallery in the Hillsboro OR library.

I also spent much of 2014 and early 2015 working on an exhibit of my landscape paintings.  I had a solo show, Familiar Terrain,  at the Second Story Gallery in Camas WA in February. And two of my paintings were in an exhibit, Water Effect, at the Schweinfurth. Showing my paintings was a new accomplishment for me.

Thanks to lots of friends who contributed their time, fabric, and talents, we sent 33 quilts to Guatemala to the non-profit Mayan Families in 2015.  That makes 202 quilts that have been sent to two non-profits in the Lake Atitlan area of Guatemala. Thanks to all who contributed to this worthwhile project.

I also managed to get a little traveling done after a hiatus in 2014 to recover from my second knee replacement.  I went to Australia in February to meet my new granddaughter, Zara May Holmstrand.  Eric and Mel became parents on December 8, 2014.  Sure wish they were closer.  I made the trip to Athens, Ohio for the opening of Quilt National, went to Palm Desert twice during the year, made numerous trips to Seattle, and had a long weekend in Port Townsend.

Hope your new year is happy, healthy, and creative.