A Weekend in Seattle and La Conner

Last weekend I went with two quilting buddies on a trip to Seattle and La Conner.  We often go to Seattle for the monthly meeting of the Contemporary QuiltArt Association.  Last week's speaker was Robin Worley who makes fashion from trash.  Robin showed us dresses made from plastic bags, CD's, tents, and even an inflatable raft.  Apparently there's an organization of these crazy designers who are obsessed with reusing the most unexpected materials.  They're planning a fashion show in Seattle in June.  See their website for more info.

After a quick stop at the Gates Foundation Visitor Center, where we learned that only a third of all humans in the world have bathrooms!, and the EMP (Experience Music Project?) Museum at Seattle Center to see the architecture (we didn't stay for the music or movies), we headed to Marysville, our headquarters for Saturday night.  Turns out there's not much in Marysvilled but an outlet mall.  We cruised the mall, had a bite to eat, and turned in early.

Sunday was another beautiful spring day.  We headed for La Conner.  It was tulip festival time, but we were a bit early.  We did see some gorgeous fields of daffodils, but the tulips were only beginning. 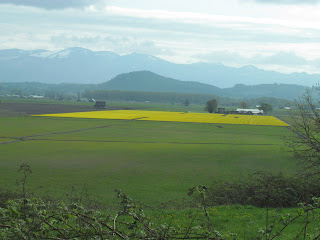 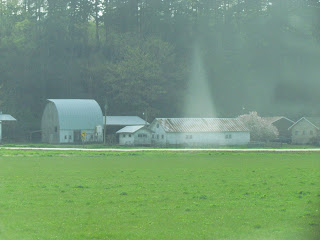 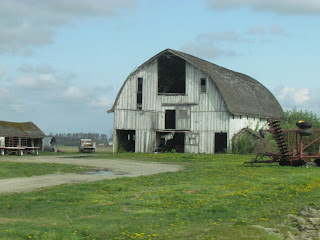 We took a quick look around town then headed for the Gail Harker Studio, which has recently relocated to La Conner.  My friend Terri Shinn was part of a student show.  Terri's work was fabulous.  You'll be able to see one of her pieces in October when the Visions show opens in San Diego.  Congratulations, Terri!

Our destination for the trip was the Carol Taylor lecture and show at the La Conner Quilt & Textile Museum.  I met Carol back in the late 1980's or early 1990's at QSDS, the Quilt/Surface Design Symposium in Columbus, Ohio.  Carol and I had several classes together over the years, the last at Nancy Crow's Barn.  Carol's talk was informative and impressive.  She is so prolific! The quantity of work was overwhelming.  Carol gave us a great gallery tour after the lecture.  After that we headed home.  One stop at Panera for dinner, then back to Vancouver.  A weekend full of quilting and creativity!
Posted by Handwerk Textiles at 6:11 PM 1 comment:

North Bank Artists has issued a Call for Entry for their annual juried fiber show.  Entries are due June 23, 2012.  Strands will be on exhibit in Vancouver, Washington, at the North Bank Artists Gallery during the month of August, 2012.  Sally Sellers and I look forward to jurying this show.  We encourage all fiber artists to submit their work!
Posted by Handwerk Textiles at 6:26 PM No comments:

More purses have been posted to the Purses for Sale page.  Check it out!  Here's just a sample of what's been added. 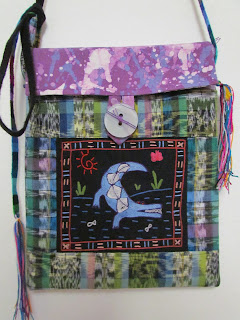 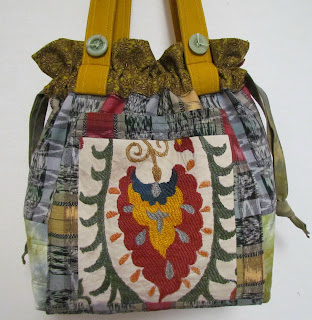 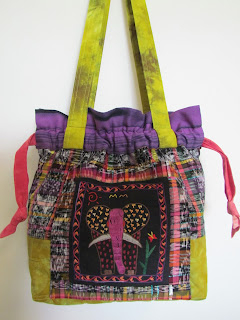 Posted by Handwerk Textiles at 1:19 PM No comments:

I've been busy lately making purses . I'm using fabrics and embellishments that I've collected on my travels over the years. I will have some purses, as well as hand-dyed fabrics and Guatemalan textiles, for sale at the Clark County Quilters' Annual Quilt Show next week. I'm working on adding a page to the blog with purses for sale. Here are just a couple of the bags that are available.
This is a drawstring tote, approximately 13"w x 14"h x 5"d.  The purse is made from my handdyes (purse bottom, lining, top gathered panel, straps and drawstring ties) and hand-woven fabric from Guatemala (purse body and pocket trim).  The embroidered parrot panel on the outside pocket is by the Cuna Indians of San Blas, Panama.  The purse is fully lined, and has an inside pocket. It's a one-of-a-kind bag by Bonnie. PDS01 - $75 + tax where applicable and shipping. 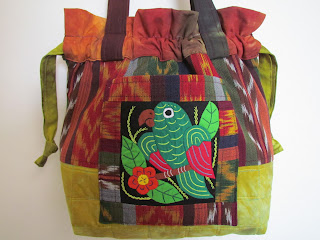 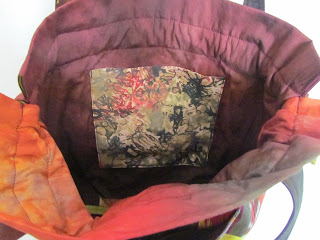 This mola tote is approximately 13"w x 13"h x 3"d.  The mola was made by Cuna Indians from Panama and forms a pocket on the outside of the purse.  The beaded loop and handwoven, beaded strap accents are from Aguas Calientes, Peru.  The outside pocket closes with a vintage button.  The exterior purse fabric is handwoven in Guatemala.  One-of-a-kind bag by Bonnie.  PMT01 - $70 + tax where applicable and shipping. 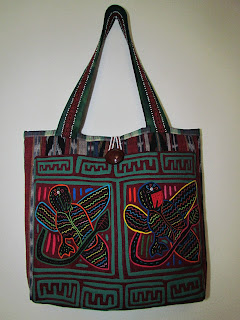 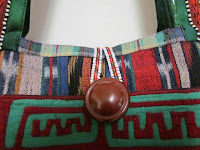 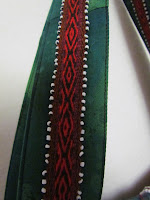 The travel bag below is made of Indonesian ikat.  It measures approximately 9"w x 12"h. I made the reverse applique spiral panel on the front pocket.  The adjustable hand-woven  strap is from Peru.  The purse is fully lined, has a zipper closure and a front pocket that secures with a vintage button and loop.  One-of-a-kind bag by Bonnie.  PTP01 - $45 + tax where applicable and shipping. 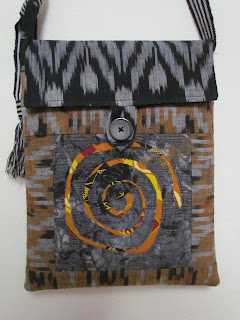 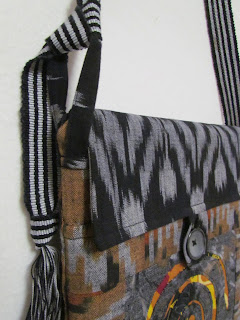 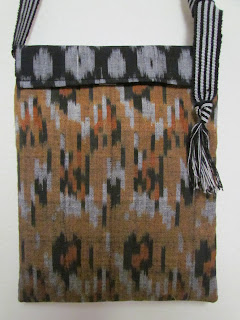 Email me if you are interested in any of these purses.  I'll have more on the new Purses for Sale page in the next few days.
Posted by Handwerk Textiles at 5:16 PM 1 comment: