I made it to Guatemala City without a glitch. 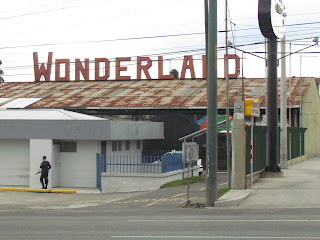 On the outskirts of Guatemala City.

I always dislike the actual traveling part of traveling. It usually makes me anxious. When I travel, I like to establish a base camp and make day trips from there. I really don’t care for the getting-from-one-place-to-another part. That’s a bit odd, because living in Alaska for 31 years, the journey was the destination. Most places you go in Alaska there really isn’t much to do, for a person like me who is not outdoorsy, when you get there. Driving and seeing the scenery is the main attraction of traveling. I don’t mind traveling on a tour. In fact, I’ve come to enjoy being on a tour. The actual traveling is okay when I don’t have to spend my time figuring out how to get from one place to another and what to see when I get there. Tours take away all that logistical stuff and let you enjoy your time and place.

Well, like I said, I had a smooth trip to Guatemala City. The next day, the van picked me up right on time and we went back to the airport to pick up my two friends, who were arriving on two different flights from Ohio and Utah. Miraculously, all the flights were on time, and when I arrived at the airport, there they were! Our van took us to Panajachel, to Hotel Regis, our home for the duration of our stays. Hotel Regis is on the main tourist area street in Pana, but set back from the street in the interior part of the block. Stucco cottages with red tile roofs are set in a garden with pathways, hot tubs, fountains and plenty of places to lounge outdoors. It’s a beautiful setting right in the heart of the restaurant and shopping area and about two blocks up from Lake Atitlan. 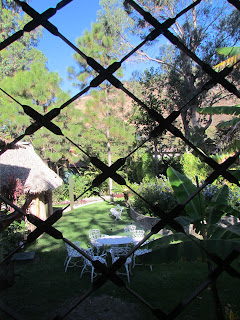 The view from our window. 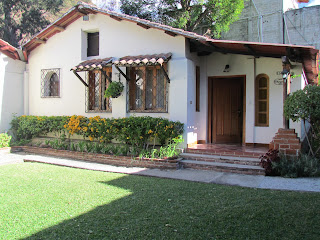 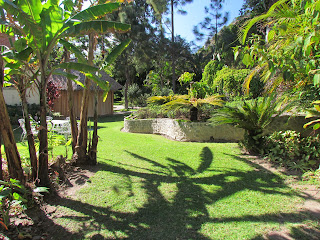 The grounds of the hotel. 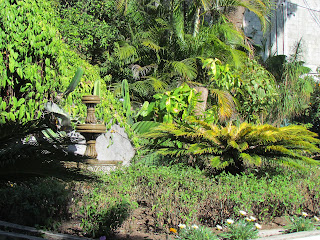 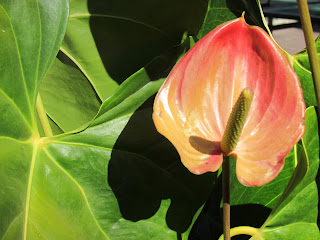 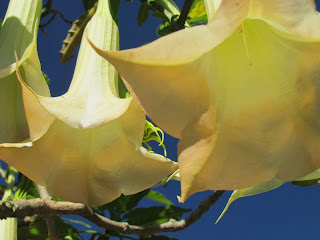 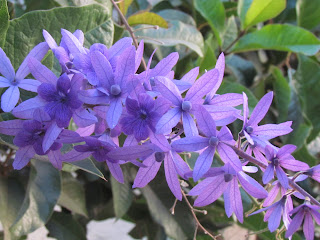 Our first full day in Panajachel was pretty laid back. We slept in, had breakfast in our room, then strolled the street and shopped. Sondra and I had to hit the fabric stores. Here’s the selection from one store we visited. 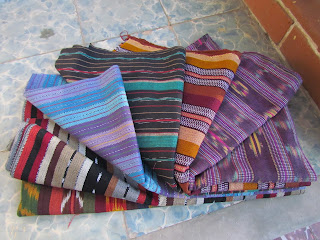 I also purchased a couple of handwoven belts, and one older one with hand embroidery. 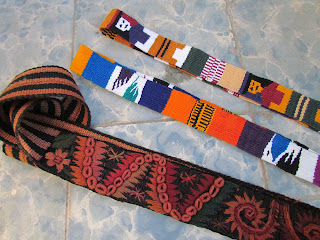 We watched the sun set over Lake Atitlan. 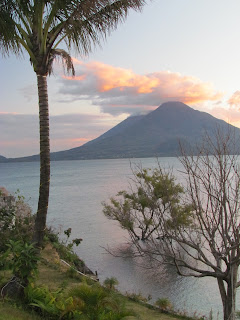 Then we ate dinner at El Bistro. Seafood fettuccini. A good end to a good day. 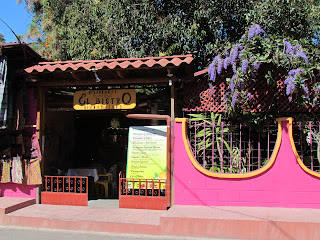 El Bistro, Panajachel
Posted by Handwerk Textiles at 10:31 AM 3 comments:

I'll be delivering the "last of the first" 100 quilts to the Santa Apolonia orphanage within the next few days.  Every child in the facility should then have a quilt.  But, there's no shortage of need in Guatemala!  I plan to continue to give quilts to the orphanage on a yearly basis for new arrivals.  Then, I'd like to make quilts for all the "tias" and permanent workers at the facility.  The tias are the "moms" that live with each group of children.  And, when I contacted Mayan Families about making quilts for my student's family, Sharon told me that Mayan Families tries to provide support for about 50 orphans that live with extended family members or friends.  So, if we make another 100 quilts, they will all have a place to go where they will be greatly appreciated! So, friends, keep on sewing!  For those of you who haven't been part of the project before but are interested in providing a quilt top, please contact me for size and other requirements. Again, many thanks to all who've contributed. 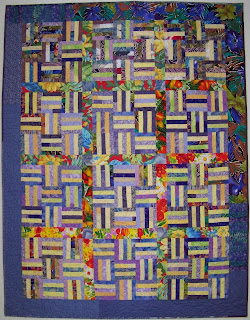 Posted by Handwerk Textiles at 10:55 AM No comments:

Mayan Students in Need of Sponsorship

Through my trip to Guatemala and working on the quilts for the orphanage at Santa Apolonia, I learned of another non-profit, Mayan Families doing work for needy indigenous families around the Lake Atitlan area.  Mayan Families provides food, medical assistance, housing needs, and student sponsorships on a very personal basis.  Donations can be made to particular people and projects.  I started sponsoring a student last year.  Francisca graduated from high school recently and will be starting university this month.

School for the children in this very depressed area starts in a few days.  Many children are still waiting for a sponsor in order to attend school this year.  It costs only $190 to send an elementary school child to school for the year.  This amount is beyond many families in the area who struggle just to feed their families.  You can check out the list of children still looking for sponsors.  Maybe you'll be inspired to help a child create a better future.

Mayan Families is an officially recognized 501.c.3 non-profit, so donations are tax-deductible.
Posted by Handwerk Textiles at 12:24 AM No comments:

I know it's tradition to take a look at the year that's just passed.  I'm not usually disciplined enough to do that, but I've had a good year, so I thought it would be fun to look back at it.  Looking it over, I was surprised to see that I didn't leave the country last year.  I feel like I've been traveling alot.  I have, but all in the US it appears.  I didn't even make it to Canada or Mexico! I have at least two international trips planned for 2012 though; the first is coming up soon!
In January, 2011, some very gracious friends delivered the first of the quilts to the Guadelupe Homes Orphanage in Santa Apolonia, Guatemala. To round out the year, 78 quilts that were shipped in September reached the orphanage on December 6, bringing the total delivered to 92! I will deliver the last 8 (of the first round) when I travel to Guatemala later this month.  A big thanks to all who contributed fabric, their sewing talents, and time.

March was a milestone month:  I turned 60 (yikes!), and Color Improvisations showed at Museum of Modern Art in Verona, Italy!  My friend Pat from Anchorage visited.  We had a great week sight-seeing and sewing. I also spent a few days in the Pallm Springs area with my sister.  We made a day trip down to Oceanside and San Diego and were able to see the Visions show and gallery.

May had to be the highlight of the year (and more!).  I traveled to Ohio to take a Dorothy Caldwell class at Nancy Crow's Barn.  I went with two Vancouver/Portland friends and met Deb, my good friend from the old days in Alaska, there.  We had a an incredible week.  From Columbus, I flew to Chicago to meet two more Alaskan friends, Nelda and Linda.  We had a great three days taking in the art of the city.  Then the three of us traveled to Athens, Ohio for the opening of Quilt National.  To my surprise, when I arrived there I learned I had won Best of Show!  That was this quilter's lifelong dream come true.  It's still sinking in.

In June I drove to Callistoga, California for a reunion of some high school women friends.  We're all turning 60 this year, but we're all still the same!

Here are some highlights of more quilt-related accomplishments.  In June and July, I had three pieces in the  Rio Patchwork Design show in Rio de Janiero and Sao Paulo, Brazil.  I won the Viewers' Choice award - which is a trip to Rio in 2012! My sister came for a visit in June, and we went to the Sisters Outdoor Quilt Show.  Linda had been to the event once before, but it was my first time there.  Beautiful weather and quilts galore!  In August I had two pieces in the American Art Company's Northwest Fiber Invitational exhibit in Tacoma.  In September my quilt Reflection was part of the Quilt National 2009 show that traveled to France for the big European Patchwork show.  That month I also spent five days in Puyallup in a dye class taught by Judy Robertson.  What fun that was.  In November I received a Juror's Choice award at Quilts = Art = Quilts in New York. My work was shown in three High Fiber Diet/Columbia FiberArts Guild shows: Back to Nature in Portland Oregon, NW Vibes at several Oregon venues, and Earth & Fire at the Museum of Contemporary Craft in Portland.  I also participated in two shows through the Contemporary QuiltArt Association:  a show at the Blue Heron Gallery on Vashon Island, and an exhibit, Chance Encounters, at the Lynnwood Convention Center.  And we completed 35 quilts for Guatemala this year, plus I finished two pieces of my own artwork.  What a productive year!
Forgive me for tooting my horn again about the prizes, but I've been making quilts for 42 years and have received very few accolades in all that time - until now.  In fact, I can remember only one previous nod - a 3rd place in contemporary pieced wall quilt at Paducah sometime in the 80's or early 90's, I think.  It seems persistence pays.

In addition, I took a painting class most of the year from Susan Cowen at Clark College in Vancouver.  Susan has been an inspiration.  My book club, besides meeting monthly and talking about books, briefly, while enjoying some of Portland's fine restaurants, had two weekend retreats to Coast Inn B&B in Lincoln City, Oregon.  My younger son moved home this year, so now both my boys are with me.  Eric's girlfriend is here visiting from Australia, so we have a full house and lots of activity.  My nephew Phillip and his wife had their first child in May.  So it's been a full year, lots of adventure and fullfillment!

I'm looking forward to a creative and adventure-filled 2012!
Bonnie
Posted by Handwerk Textiles at 11:35 AM 2 comments: